FlyNano has created a worldwide buzz and media attention again after the first airborne testflight in June 11, 2012. Here are some media picks related to the maiden flight. 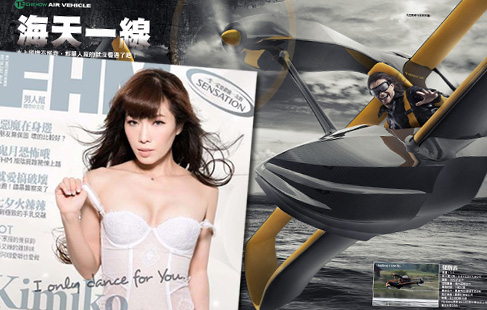 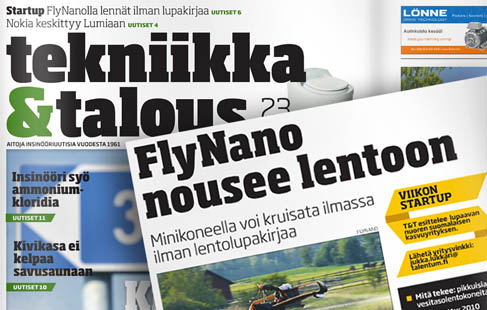 The first airborne testflights of the FlyNano electric proto has been done. Some lucky ones of you saw already the latest testflight video that was visible over the Finnish night. Here is the new video with some still shots too. Now we will continue to work on further development. Many thanks for your support and patience. We'll be back with more flights as soon as possible.
Date and time: June 11, 2012 at 20:09
Location: Lake Hepari, Kirkkonummi Finland/ 60.24568, 24.39839
Pilot: Pekka Kauppinen
Posted by FlyNano at Tuesday, June 12, 2012

FlyNano will continue the test flights – which were interrupted by the
Finnish winter – as soon as the covering ice of the lakes in Southern
Finland is gone allowing safe taxiing for take-off and landing.

During the winter the prototype got an entirely new power-train, which
will make last autumn's shortage of power a part of history. The new
engine, propeller, controller and batteries form a package that is
substantially stronger than the earlier model.

When the FlyNano concept was presented last year at the Aero 2011
trade fair in Friedrichshafen, Germany, it was envisioned to be primarily
powered with a combustion engine. However, the development of
electric motors and batteries has been immense during the past year
and the demand for electric powerlines has been increasing continuously.
In the future FlyNanos will primarily be equipped with electric
motors as a response to the final users' expectations.

FlyNano's goal is to start the production within the following year and
to deliver the first 35 planes – already sold in advance – by the end of
2013. The international patent is currently pending to protect the
configuration.

Now focusing on the on-going test-flight program in Finland, FlyNano
will not participate at Aero 2012.

The latest tests showed that we don’t get the expected power from the powerline necessary for takeoff. The airspeed still remains below the takeoff-speed. For trying to lift the baby off with these specifications we would need optimal weather conditions.

So right now we are concentrating on getting more power and further reducing the water-resistance. So currently we are checking several options. The lakes will soon be frozen in Finland but this naturally will not prevent us from going ahead. We will be able to optimize the settings for the powerline and continue testing in warmer climate then.

We will keep the delay as short as possible. Stay tuned!
Posted by FlyNano at Tuesday, November 29, 2011

At our previous high speed planing tests our maximum airspeed has been around 65km/h. During tests when Nano was heading up we noticed that Nanos tail tip touched the water surface taking speed down and preventing getting the right angle for the wings. Anyway we were pleased to see that Nano stays very steady even when it's coming down nose first.

The modification has been done by now and we are ready for the next test in the upcoming days. And again, big thanks for all you enthusiasts participating and supporting us!

“The winning idea of the general competition in 2011 is very international, innovative and brave in nature. In addition it can be said that the idea in question is not just a thought, it’s actually being concretized as real and tangible international business,” says Jalo Paananen, the Chairman of the Jury.

In total 56 business ideas were sent to the competition. More than 1/3 of the participants were cleantech-related.

FlyNano proto is planing on the edge again! Weather was not optimal and Nano's airspeed was still slightly too slow (~60km/h). Our next test will be as soon as we have nice calm weather. This Finnish autumn weather is sometimes surprising. Luckily it has stayed warm so we don't expect ice cover on our testsite yet :) Thanks for all the comments from You !
Posted by FlyNano at Tuesday, November 01, 2011

This is the newsblog of FlyNano.
We are developing extremely light personal fun flyer. Here we will update all the latest news related to FlyNano.